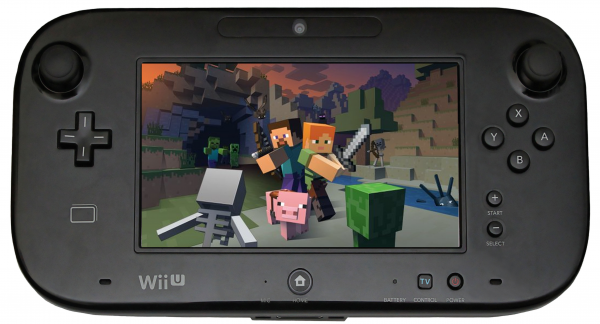 Minecraft and Nintendo Wii fans will rejoice this Christmas since the popular video game will be released on the Wii U. This is seen as a big step for Minecraft, which has been available on many other platforms (like the PS4 and Windows Phone) for years.

This is also a huge improvement for the Wii U, which has experienced lukewarm sales and has released only a handful of decent games in 2015. Minecraft has been available since December 17th and has a price tag of $29.99. It can support a maximum of four players in the split-screen mode and a maximum of eight players online.

Nintendo reminds gamers that the split-screen feature requires the use of a high-definition TV. One of the best parts of the game’s Wii U edition is that it supports the off-TV gameplay feature. This means that, if other friends or family members want to watch or play something else on the TV, Minecraft gamers can move their game to the Wii U GamePad with ease and without getting interrupted.

Another good thing about it is that Minecraft developer Mojang promises that they’ll provide free updates to the core game, just like what they’ve been doing in other platforms.

Minecraft Wii U edition can be downloaded from the Nintendo eShop and will be bundled with some of the most popular packs. These include the Battle & Beasts Skin Pack (both 1 and 2) as well as the Natural, City, and Fantasty Texture Packs. Mojang even threw in the Festive Mash-Up Pack, which is perfect for the upcoming Yuletide season.

Aside from the add-content mentioned above, gamers can opt to purchase other add-on packs from the eShop to enhance their Wii U gaming experience. These include Plastic, Pattern, Candy, Cartoon, and Steampunk Texture Packs as well as the Halloween 2015 and Greek Mythology Mash-Up packs.

Branded content are also available, and these include The Simpsons Skin Pack, the Skyrim Mash-up Pack, and the Doctor Who Skins (both Volumes 1 and 2). There are even Star Wars-themed content, so Star Wars fans, who are already in the frenzy with the soon-to-be-released seventh installment “The Force Awakens”, will go gaga over the Star Wars Classic Skin Pack, Star Wars Rebels Skin Pack, and Star Wars Prequel Skin Pack.

In their blog, Mojang reveals that they’re planning to add more content packs to the Minecraft Wii U edition in the future. However, they’re quick to remind gamers that they can have hours of excited playing the core game and won’t necessarily have to burn extra cash and buy the add-ons just to have fun.

Why the Long Wait?

The Minecraft Wii U edition will certainly grab the attention of many fans, especially those who like the Wii U and those who are just looking for a new platform where they can build their blocky creations. However, many fans (and maybe even non-fans) will ask: why is this happening only now.

It’s an important question, but unfortunately no one has a clear answer to it.

Perhaps Mojang didn’t see the Wii U as a viable platform for its game or thought that many of their target audience weren’t using the console. Or maybe Nintendo didn’t consider Minecraft as a game that would make the Wii U more attractive to a lot of people.

Either way, it’s clear that many people think that the two companies have wasted a lot of opportunities and a substantial amount of time. However, numerous gamers seem to be determined to bury the past (so to speak) and just enjoy the experience that the Minecraft Wii U edition will provide.

What The Future Holds

For now, it seems that Mojang and Nintendo will concentrate on creating new content for the Minecraft Wii U edition. Fans expect that they’ll make full use of the Wii U GamePad controller, which can provide a unique twist to Minecraft‘s gameplay.

However, it appears that Minecraft is the only Microsoft game that’s being made available to the Wii U for now. Microsoft (which acquired Mojang for $2.5 billion in 2014) revealed on Twitter that they “have no information of any games coming to the Wii U other than Minecraft at this time”. This statement might disappoint some, but many experts have taken this to mean that there’s a possibility of positive announcements being made in the future.

Fans will also rejoice in the fact that the Minecraft–Nintendo partnership isn’t the last platform launch for the game. Virtual reality headsets Microsoft HoloLens and Oculus Rift (which is owned by Facebook) have announced that they will also provide support to Minecraft. Microsoft, specifically, revealed that the new Minecraft for HoloLens version will take advantage of the device’s mixed-reality features.

In June 2015, the company held an on-stage demonstration during the Electronic Entertainment Expo, in which they showed how gamers can use gestures and voice commands can explore the Minecraft world and build their own creations.

Minecraft for HoloLens will still support traditional controls, but Microsoft seems confident that gamers will want to use the device’s intuitive controls and take their gaming experience to a whole new level.