Minecraft has come up with names for everything.  Mobs are all those creatures, animals, and monsters you find in the game. Don’t confuse them with Minecraft mods, which stands for modifications. Mods are add-ons for the game. Minecraft mobs are mobile creatures and can be found anywhere from the grassy plains to very dark places.

Where Do These Mobs Originate From? 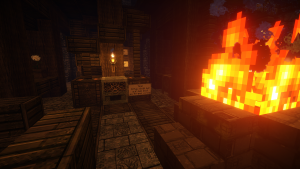 There are two main places where mobs can come from. The first way is random spawning. This is completely random, but you can find certain mobs in certain places such as grassy areas or dark places.

The second way mobs can come into existence is from Mob Spawners. Mob Spawners are blocks that will spawn into mobs. Spawners can be destroyed by using a pick axe. These blocks can spawn creatures such as zombies and skeletons.

Types of mobs include:

Hostile mobs are are out to hurt you, or even kill you. Most of them will spawn in the dark, in a not well-lit house or even caves. However, some like creepers, can spawn during the day too. Here is a short list of some of the hostile mobs in Minecraft:

Creepers: Creepers are weird looking mobs that are filled with explosives. If they explode near you it can cause significant damage.

Spiders: Spiders look just like blocky-looking spiders. There are two main types – a larger spider that spawns in the dark and a smaller cave spider that only spawns in empty mine shafts.

Zombies: Zombies are dangerous mobs too, however, they are slower moving. They also die in the sunlight, so that  is a positive.

Skeletons: Skeletons are one of the more common mobs you will run into while playing the game. Beware though, they will shoot you with arrows.

Silverfish: These mobs are only found in strongholds (which are an underground fortresses). They emerge from Mob Spawners (blocks that spawn mobs).

Witches: Witches are very dangerous enemies. These mobs live in swamps. A witch will throw dangerous potions at you, so watch out! 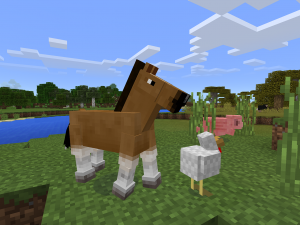 The mobs that you don’t have to fear are the passive mobs. These mobs are pretty neutral and, most times, you will eat them.

Cows, Pigs, Chickens, Sheep Mobs: These mobs are farm animals you can breed. All of them you can eat, except for sheep, which will provide you with wool.

Bats: Bats are quite harmless. You can find them in dark places, but don’t worry. They won’t hurt you.

Squids: This mob is always found in the water. They won’t hurt you. But if you need ink, you can kill them.

There are several mobs you can tame as pets, if some wild animals. They end up making good companions when you are alone. Some pet mobs include:

Kittens: If you feed tame cats they will give you kittens. Kittens are such cute pets!

Wolves: Tamed wolves are a lot like dogs. They will follow you around, beg for food, protect you and even protect your house.

Puppies: If you have two tame wolves at full health and you feed them, they will provide you with adorable puppies!

Ocelots: You can tame an ocelot by feeding him raw fish. They sometimes will end up getting in your way. However, they are really good at scaring off creepers.

Overall, there are pros and cons to running into mobs while playing Minecraft. However, you have to admit, mobs make the game that much more interesting! Thanks for reading this article! Feel free to leave your comments below.