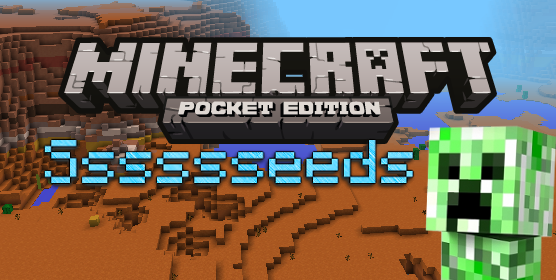 Minecraft Pocket Edition 0.90 update is, by far, the greatest update ever – and without a doubt. However, just like any other versions, this update did not go out bug-free. Ever since the 0.9 update, Minecraft Pocket Edition updated more than 4 times in a span of only 9 days. These updates contain a bunch of bug fixes, performance enhancements, and so on. Aside from that, previous seeds from 0.8.X will no longer work. Hence we have created a new list of MCPE Seeds for Minecraft 0.9.X Alpha – all tested on MCPE 0.9.4.

Since the biggest update ever, players have been going around their new worlds searching for dungeons, labyrinths, villages, and some crazy biomes, so we’ll go ahead and give you just that.

Note: The seeds featured here are tested on MCPE 0.9.4 only and on the Infinite World type. Having a different World type will generate a very different world. 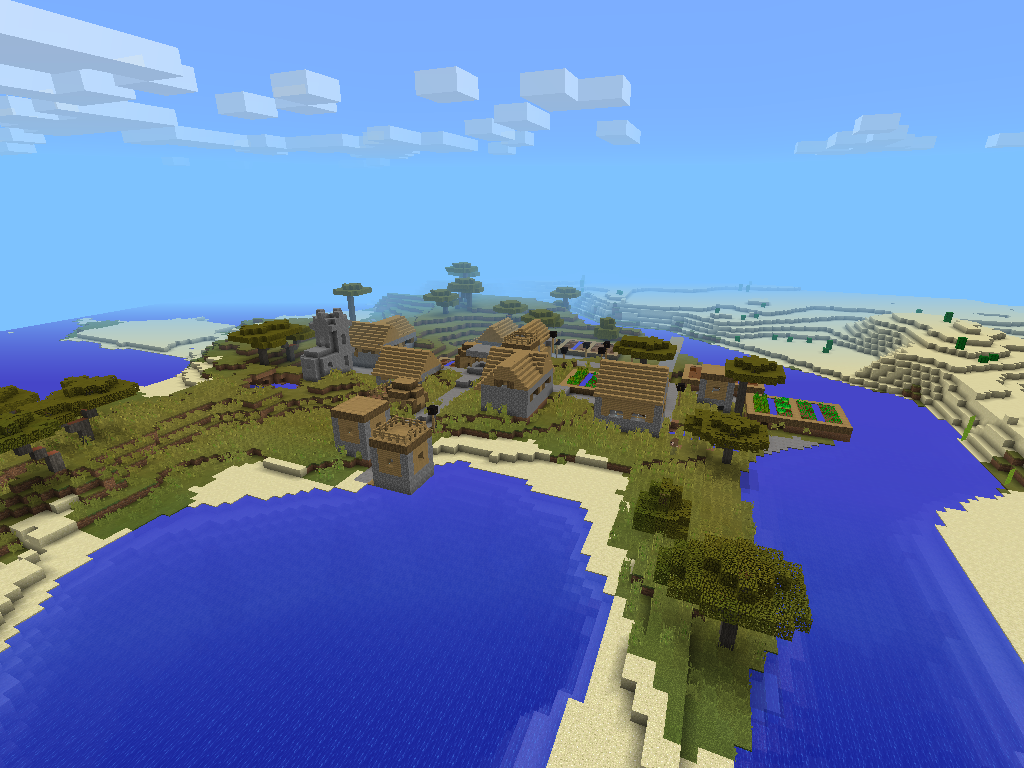 This is an amazing seed for MCPE 0.9.X which spawns you near a sweet looking village in a Savannah biome. The village and the scenery themselves look fantastic, and the desert biome across the river is just perfect for exploration and city expansion. But that’s not all, locate the village well, jump in and dig straight down to find an amazing stronghold! But watch out, digging inside the well will release some silverfishes which will attack you on sight.

If you think you’re brave enough and capable of exploring inside the creepy stronghold, you will find yourself some nice treasures and the portal to the End. I guess the villagers are keeping it all a secret. This great seed is even worthy to compete against the best PC seeds out there – so do yourself some favor and try this out. 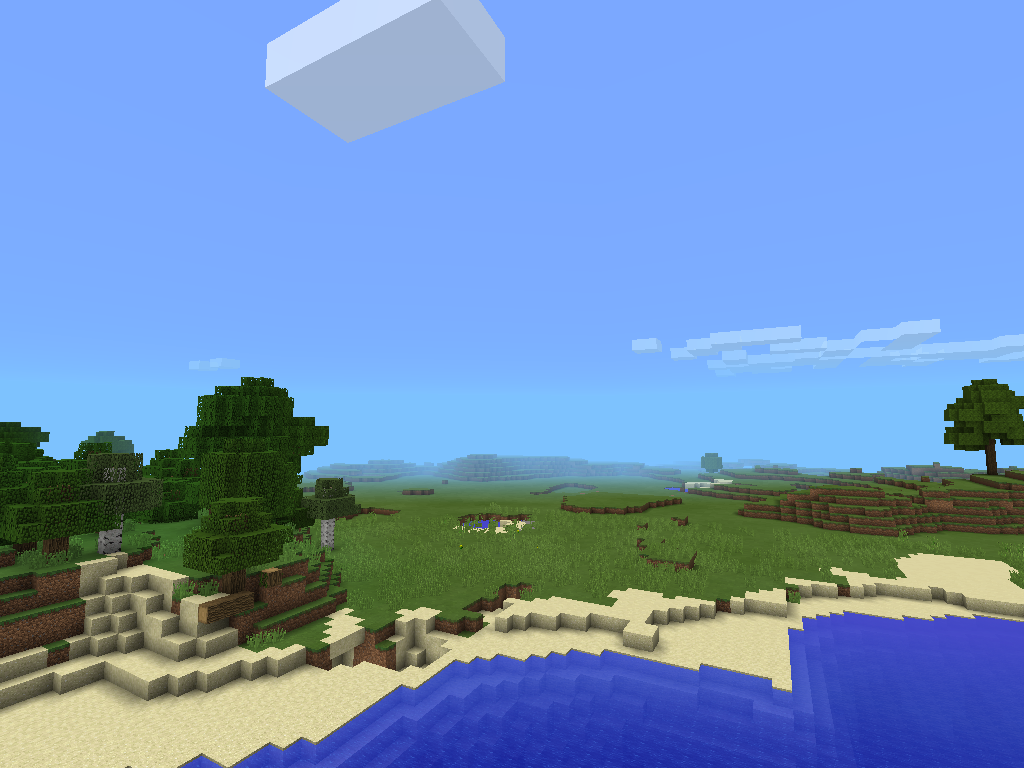 This seed will spawn you right in the middle of a plain biome surrounded with birch forests and rivers. Although it lacks villages and other pre-generated structures near the spawn, the spawn area itself is a nice place to build houses and on starting a new village for yourself or with friends. Heading pass the birch forest, you will encounter a grass land close to a river. Now the jewel of this seed is located pass beyond that river where a massive mesa biome is located.

The huge mesa biome features rivers, some trees on the outskirts, and many more giving it good scenery for western-themed structures and servers. It is also ideal for starting a new survival world in a much different environment. 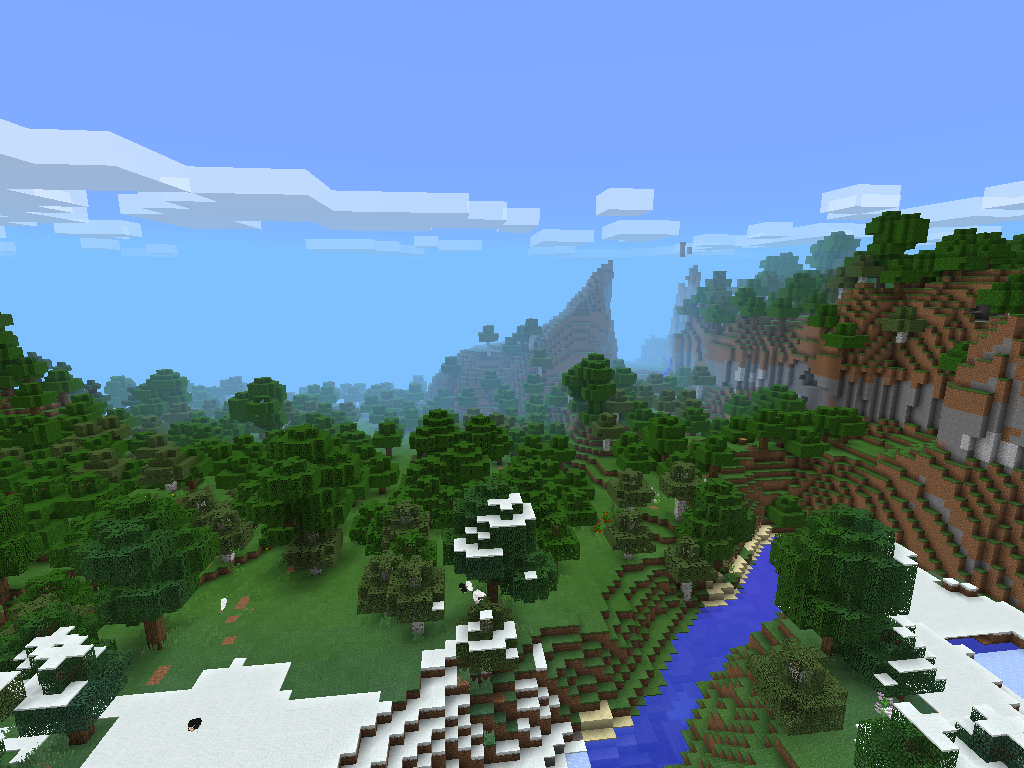 Also known as “It’s a Go!” (typing it on the seed box will give the same result), this seed is probably inspired by the Disney Movie Frozen. This seed will spawn you in the field of purple flowers inside a birch forest biome with a huge mountain and a river behind you. Going pass the river is a flat field of snow with some distant scenery (where everything seems small) of what seem to be spikes.

Heading forward you’ll see massive ice spikes as tall as towers, lava pools in snow, and a huge area filled with icy goodness. So if you always wanted to be the ice queen or king of your kingdom (hopefully not of isolation), then this biome is the perfect seed for you. 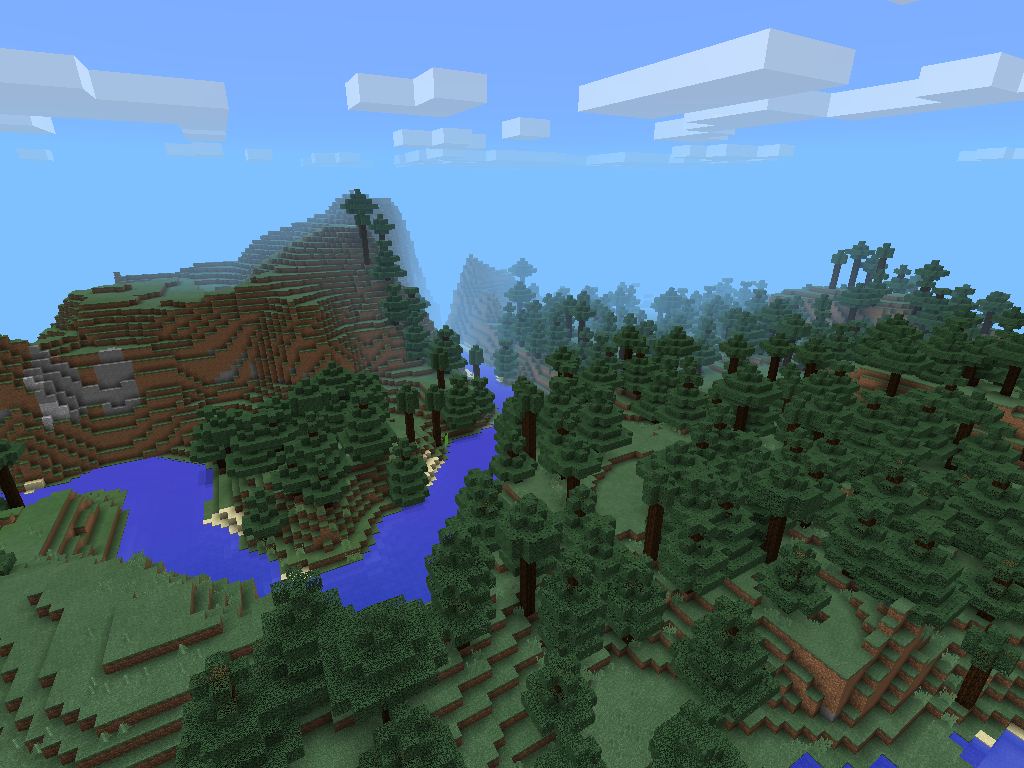 If you miss the old world generation back on the beta days of Minecraft PC, then this seed will make you nostalgic. The seed “Fantasy” will take you in the middle of a pine forest surrounded with massive mountains with natural caves and scenic plateau. The massive mountains and trees on the horizon remind me of the good old Minecraft days. Add that to the huge caverns, caves, lava falls, and twisting rivers and you got yourself a seed worthy of its name.

What seem to be the boring side of this seed also has something exciting hidden on it, as the great desert biome holds one creepy stronghold underground. Find the entrance and get ready for a dangerous treasure hunt. 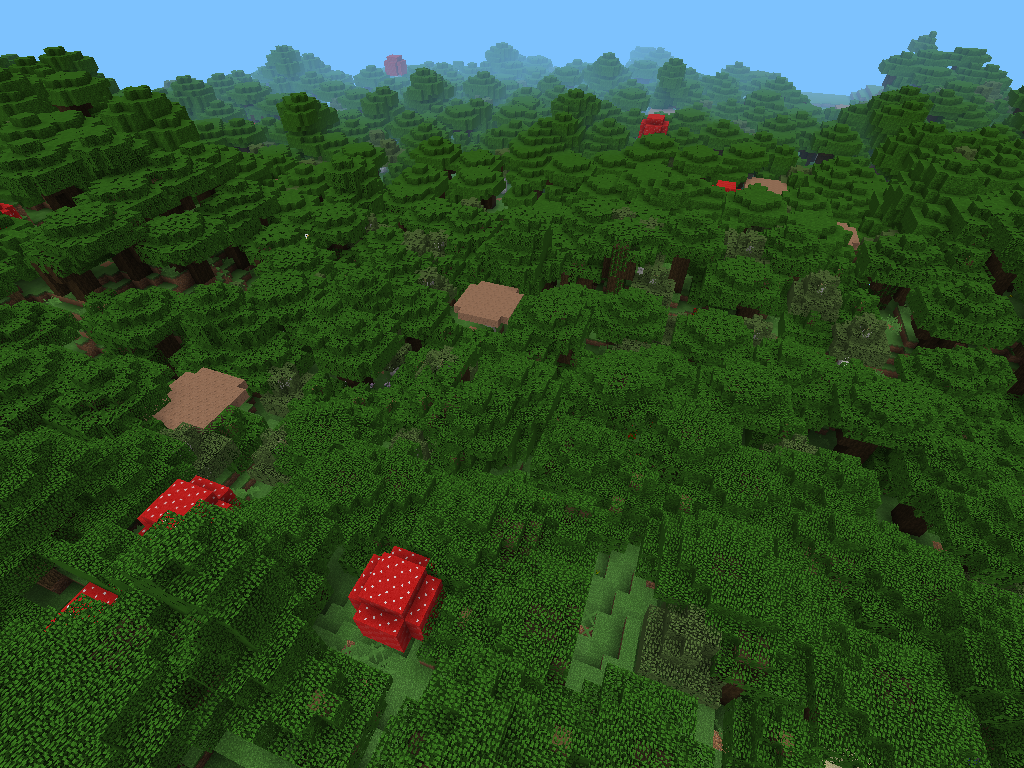 This seed features one of the most massive roofed forests I have ever seen. Hands down, the size of this roofed forest makes it almost impossible to navigate your way in survival with danger creeping on every corner. Giant mushrooms can also be found sprouting on some areas as perfect landmarks.

If that isn’t enough, right beside the huge roofed forest is a creepy looking swamp which might actually be safer than the forest itself. Huge rivers, and trees that meet the horizon is what best describes this seed. This seed is ideal for survival players who love a challenge. 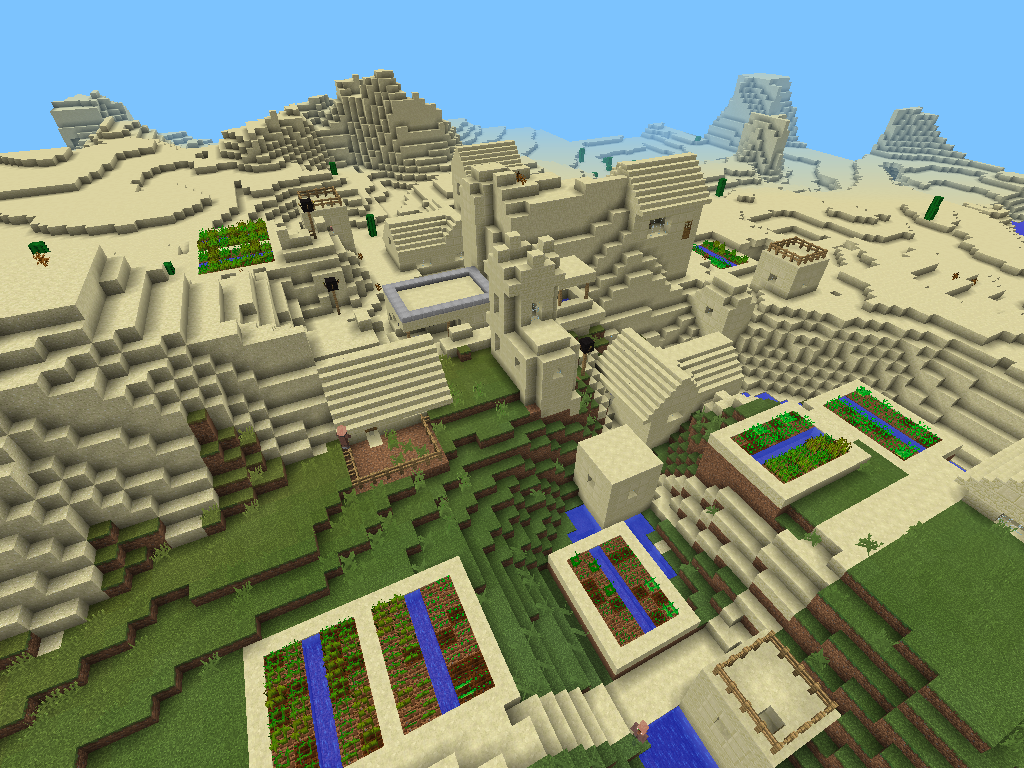 If you are a family type of person, then you are probably looking for a good village seed where you can settle down and improve. Lucky for you, this seed will spawn you right in the middle of a huge and beautiful desert village.

But that’s not all, right beside the village are two more villages with intersecting roads. One village seem to have spawn in the surface of the water which makes it for a good fishing spot and port, the other village is seamlessly combined to the water village with the center well/intersection far away from the houses making it look like its preparing itself for expansion. This is a probably one of the most gorgeous-looking village seed anyone can have.

Although the MCPE client went through a couple of updates, they can still connect and play to MCPE servers as long as the updates are merely for the client’s. For example, your device with an MCPE 0.9.4 installed can still connect to MCPE 0.9 servers without major problems.

Get Your Own Pocket Edition Server Today

Want to play with your own world with your friends from across the globe? Get an EnviousHost Pocket Edition server today and host your own updated MCPE server and experience an infinite world right in your pocket.

EnviousHost provides powerful, hassle-free servers that will fit right in your budget. So what are you waiting for? Grab your own EnviousHost server today.