Have you ever thought of settling down on one single space rock and call it home? Don’t you ever get tired of chasing down space pirates? They could come to you instead, after all! Maybe it’s time to for a change. Maybe you need to build your very own Space Station! After all, what good are incredible StarMade fighters without a proper place to dock them?!

Building your very own StarMade Space Station is a HUGE project! Today we’re going to show you 5 of our favorite Space Stations –  including some that utilize the new rail system mechanics from the latest StarMade update. With this new rail system, players can add all kinds of linear and rotary movements to their creation. These allow them to create complex moving ships, jaw-dropping docking systems and even robot-like stations! Check these out! 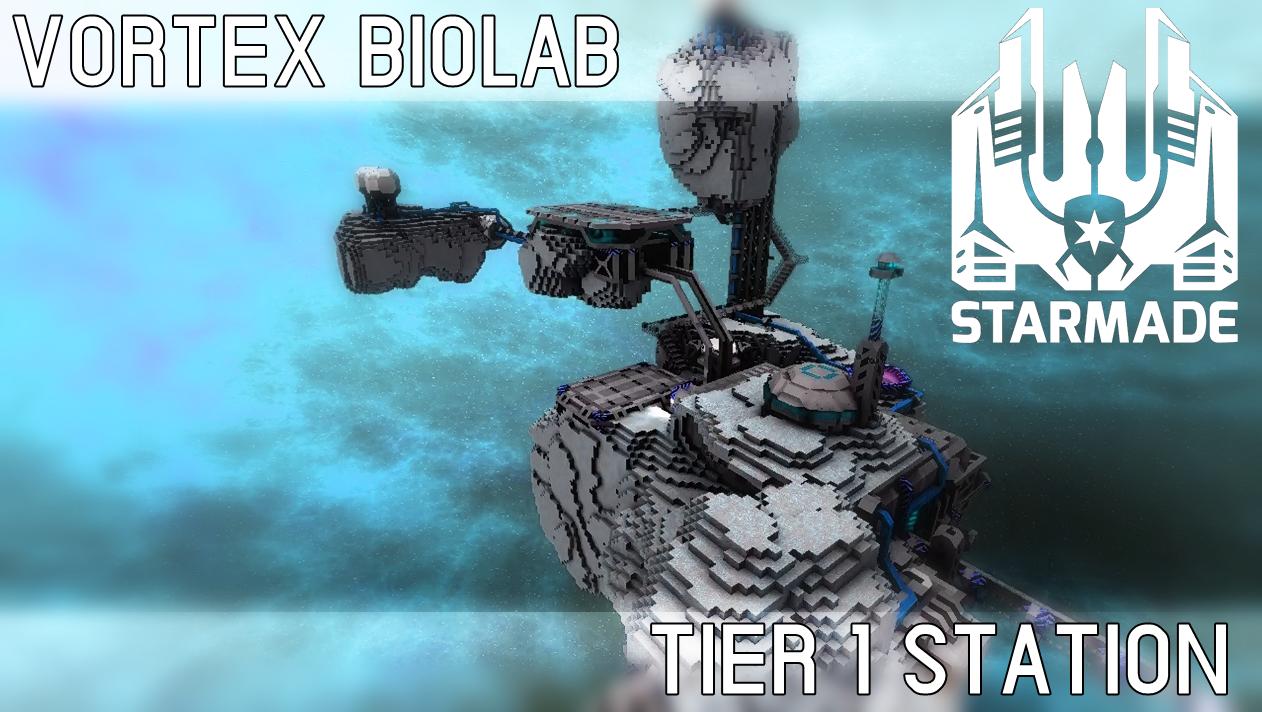 Created by SkylordLuke, a famous StarMade player, the Vortex Biolab Station is a secret space station that houses very dangerous alien biological experiments. The station is built around a roleplay adventure where hazardous aliens are kept inside creepy bio tanks where they will be studied. The station features an advanced security system so no alien can escape from their chambers…or can they? There is also the new rail system with lots of sweet interior and exterior features, plenty of secret rooms and a well-designed space structure for massive roleplay potential. 10/10!!

The very first space outpost created by the Trident team, the Trident Deep-Space Outpost is designed for frontier operations and is able to accommodate up to eight space crews. This relatively small space station features a large factory system, ample storage, docking facilities for both fighters and capital ships, a docked medium fighter and some heavy turrets and guns capable of blasting any enemy invader who would dare to come close. This space station has an advance sci-fi look with its bright blue symmetrical design and red lights that high-light some important parts of the station. There’s even a handful of well-hidden fighter launch points.

Ever wanted to be the bad guy in space? With SkylordLuke’s Cepheid Asteroid SuperStation [Legendary Tier] you finally can! The Cepheid Asteroid Superstation was once an abandoned mining colony that now house space pirates, smugglers and underground traders alike. This space station is filled with loads of equipment, ranging from small mining lasers to capital ship weaponry. This space station is created as a haven for pirates and black market traders and it features a mix of primitive defenses to unbalanced fire power – just a thing to expect from a pirate’s hideout! 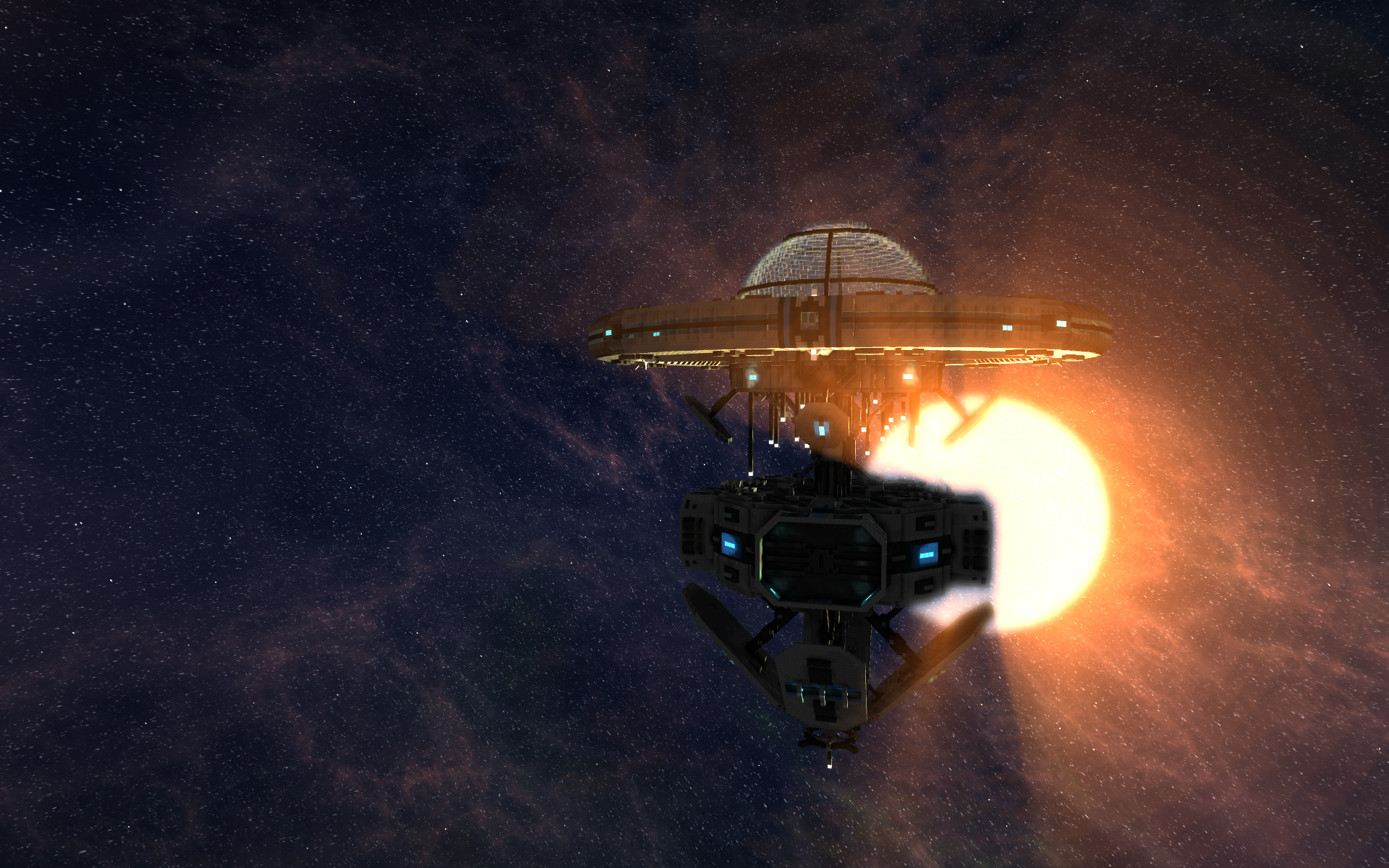 Created by Dalmont for a Space Station contest several months ago, the Trading Guild Outpost is a small station with killer looks, a habitation ring, gravity elevator, shops and even its own biodome. There’s also good defense and proper shielding. But what really makes this station special is the absolutely gorgeous design. It fits really well with existing vanilla stations. The exterior also features a sleek symmetrical design but the interior gets creepy – more closely resembling a Space Lab than a Trading Post. All in all, this station is absolute eye-candy.

Created by Tshara, the Tranquility Station is part of the neutral faction and is basically abandoned by previous inhabitants. What we love about this station is that it has been completely stripped down of all its equipment other than the main power source and shield system, making it very customizable and open to any improvements you can dream up. The interior of this station is mostly grey-scale, making the power system stand out with its bright blue color scheme. There’s plenty of room for customization, and the base structure itself has tons of role play potential!

Earlier this month, StarMade released its heavily-anticipated Rail System Update, which includes a full redesign of the docking and turret system and a bunch of other cool new features. The new Rail System adds basic linear movement and rail rotation for blocks and docked objects while also allowing full control with the logic system. Turrets also saw a dramatic redesign and can now be divided into multiple rotating axis points. The latest update also includes four new logic blocks: button block, flip-flop block, wireless block, and remote block to help integrate the new Rail System into the game. To learn more about the new features, check out the video below:

In addition to all these amazing features, the StarMade team also saw some dramatic changes. New staff members, a new game website, rebuiding the StarMade forum, and creating an official up-to-date StarMade wiki. Yes! StarMade is really stepping it up this month, and hopefully for all the months to come!

Create Your Own StarMade Station with EnviousHost

Conquer the galaxy and defend your turf by hosting your own StarMade server with EnviousHost! Build devastating ships and create the Space Station of your dream with the help of your friends from across the globe.

EnviousHost offers affordable, topnotch services to keep your StarMade and Minecraft servers online. So what are you waiting for? Enjoy a lag-free space travel with your very own StarMade server today!