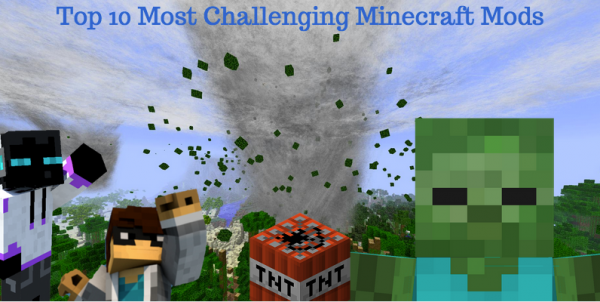 Some people think Minecraft is an easy game. Sure, once you’ve been playing for a while some things seem easier. But, have you gotten so good that you’re starting to find the game boring? Dare you say that you have mastered Minecraft?! We’re here to help you add a new flame in your game with these 10 challenging mods! Before you play, though, remember that these mods only work when you install them on your host server, just like our other favorite client-side Minecraft mods.

Rougelike Dungeons is a simple mod that generates rare small towers in your Minecraft world. These towers generate a large underground dungeon with plenty of loot, functional rooms and a ton of hostile creatures. The dungeon structure is inspired by many dungeon-crawling RPG games and thus features a lot of surprises! The level of difficulty increases with each floor you go down, so the deeper you explore the harder the game will get. Venture deep into the dungeon and pray that you can return safely to the surface!

This mod tweaks Minecraft’s hunger mechanism to make it both more difficult and rewarding at the same time. At a glance, this mod makes your hunger bar deplete constantly. When your hunger reaches certain level, your character will be inflicted with various status effects such as mining fatigue and slowness, and at dire levels you will suffer even greater effects. At 0 hunger level your character will instantly die regardless of your heart. Ouch! On the flip side, if you keep yourself fed you will benefit from the well-fed status effect that grants hp regeneration. Aside from altering hunger, this mod also makes farming and breeding more time consuming and a bit more challenging than normal.

There are many players who build giant effigies to themselves once surviving becomes too easy. They like to show off to the World how great they think they are. With this mod installed, the World isn’t afraid fight back! Localized Weather & Stormfronts add sudden storms and hurricanes to your world. These natural phenomena aren’t just for show either – They can wreck havoc to your creations and destroy your character. Now let’s see how “easy” Minecraft is after a storm hits your little fortress! Luckily, these events are rare by default. However, if you really want a greater challenge, try meddling with the configuration.

If the world of Minecraft is still too easy on you, this mod is sure to wipe the smirk off your face. Created by FatherToast, this mod will generate a variety of surprises that make your world more challenging. Deadly World features randomly generated landmines, silverfish veins, lava pockets, arrow spawner and so much more using only vanilla elements – and all of them are aimed towards killing you and any other unfortunate souls who happen to be nearby.

Another great mod from FatherToast, this mod adds a greater variety of monsters based on vanilla Minecraft. While the monsters added on this mod aren’t at all overpowered, they tend to provide extra challenges when fighting against a mob. This mod adds creepers that set blocks on fire, skeletons that shoot poison arrows, zombies that will grab you with a fishing rod, mother silver fish that spawn a bunch of baby silver fishes and so much more. On top of everything else, it creates explosions!

This mod makes Minecraft more realistic and extra difficult by adding few new mechanics such as thirst, sanity, temperature and even air quality. Being exposed in the dark for too long will make your character insane. Heading towards a deep cave will make it hard to breathe. Getting exposed too much to the sun will inflict a heat stroke. The elements are really out to get you in this mod! Aside from all this, this mod also adds landslides, earthquakes, poisonous gasses, food spoiling and a lot more. Sound like too much to take? Well it probably is. Good thing this mod is highly configurable!

Have you ever tried encountering the creatures from this mod in survival? They are insanely difficult to kill and often require different means of slaying them. This mod adds several overpowered “Mutant” mobs that naturally spawn in the wild. These mobs are: Endermen, Skeletons, Zombies, Creepers and Snow Golems. Mutant mobs act as bosses and are able to summon other mobs. Because their spawn can be rare, you might never encounter them unless you adjust the spawn rate in your configuration.

This mod randomly makes hostile creatures extremely powerful by giving them Diablo-inspired enchantments and effects. These creatures drop quadruple experience and a random enchanted item – making them worth hunting. Sound easy? Maybe. But we should mention that mobs affected with this mod also have more HP and usually have more than one special effect. Still sound easy? Some of these effects include invisibility, regeneration, stealing your weapon, and spitting a ghast fireball, among others. For a real challenge, try out this mod with the Special Mobs mod.

Probably the best AI-enhancing mod out there, Zombie Awareness makes zombies and skeletons smarter and deadlier. With this mod installed, zombies and skeletons are able to track players down from hundreds of blocks away. They also randomly spawn in groups that target gamers directly upon spawning. These mobs will also be able to locate player position through sound, light and blood scent. Spawning rate for zombies is also pumped up dramatically and they are able to chase your character across greater distances. This is a great way to play your way through the zombie apocalypse!

Spice of Life is an underrated mod that makes Minecraft significantly harder when paired with other mods from this list. This mod adds a diminishing return effect to each meal your character eats – forcing players to secure a variety of food to stay healthy. Still think you can live by bread alone? Just wait until you get tired of eating it. Now imagine coupling that with other challenging mods from this list!

Note: We do not own nor claim ownership to any of the mods listed above. We put lists like this together to make sure everyone in Minecraftia has the chance to get the best gameplay possible.

Get Your Very Own Server Today

Host your very own Minecraft server with EnviousHost and experience performance, support and value you won’t find with any other Minecraft hosts. EnviousHost also features servers for Minecraft Pocket Edition (MCPE) and StarMade.

So what are you waiting for? Don’t be envious – #OwnYourWorld today!