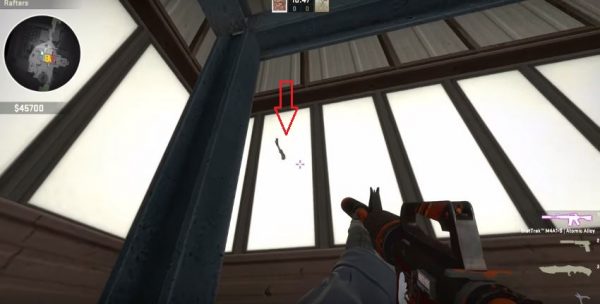 But before you get on to compete with the veterans and the big boys, there are a few things that you should know before starting or joining a match.

And in this post, we will be showing you 5 helpful things you should know when playing CS:GO.

Players Shoot Through the Camera

In CS:GO, players don’t shoot bullets through their guns but through their faces. I know it sounds crazy but the character model has nothing to do with your first person camera.

Players can shoot through short walls as long as they can see you, regardless if their gun is right behind the wall. To use this to your advantage, you have to familiarize the game’s camera placement.

A standing player has it’s camera 64 units above the ground – normally, this places the camera right in the model’s head. However, keep in mind that some animation changes the model’s stance but this will not change the camera’s placement.

In general, if you can see the player’s head, then it most certainly can see you AND shoot you too regardless of where the rest of the body is.

Your Shadow Can Give Away Your Position

Be mindful with your shadow as some maps create long shadows that may give away your position while hiding behind a corner. You can also use this to gain some tactical advantage.

Make sure that your shadow setting is set to the highest that you can possibly allow.

High quality shadows may reduce performance and eat a lot of your resources but it can also give you an edge in combat.

Your Guns Can and Will Stick Out and Betray You

Just like your shadow, your gun can stick out of a corner and give away your position – especially rifles. So if you’re trying to ambush your enemies, be mindful of your shadow and where your gun is pointing to.

Sometimes, guns can also clip through walls and other solid objects like giving yourself to your enemies in a silver platter. 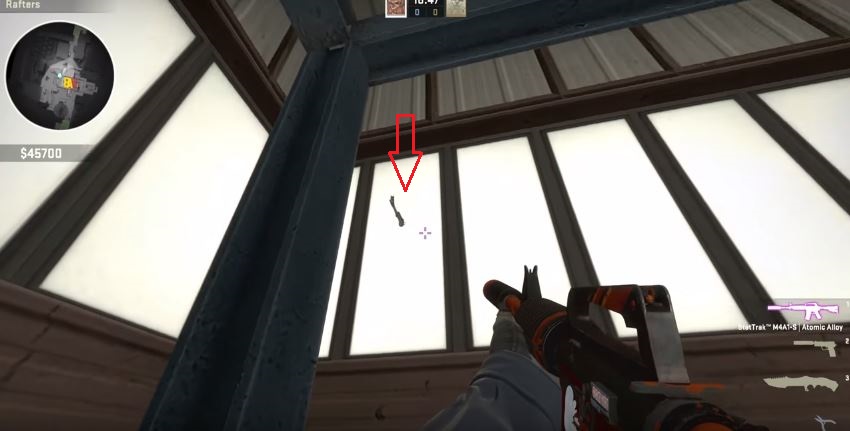 To counter this, you can back away from corners or thin walls/ objects, look on the other direction, or aim your cross-hair down.

Depending on your play-style, the former might be more efficient when setting an ambush.

Automatic Rifles and other rapid-fire guns produce heavy recoils that will affect your aim and precision.

The popular and very powerful terrorist rifle AK-47 and it’s CT counter part M4A4 are among the most used gun in the game, but regardless of the gun strength and type the spray/recoil pattern remains the same for all of the guns.

When you held your mouse steady and keep the shoot button pressed, your automatic rifle will rapidly shoot in the direction of your cross-hair but NOT inside the cross-hair.

If you do it in front of a wall, you will see the gun’s recoil pattern. To counter the recoil, you have two options; you can fire the shots in bursts or individually or practice the spray control.

Firing shots in bursts works on all occasions as you only need to land a couple of shots to take an enemy down. However, practicing the recoil control could go a long way.

Now the recoil control is a topic all by itself and includes a lot of practice in countering spray pattern. To practice the pattern and compensate for the recoil, you can head over to any of these articles and start practicing: [1] [2].

Yes, that circle thing on the upper left corner of your screen is the Mini-map.

The Mini-map or radar. the radar gives an immediate topography of the map and the location and direction of your team mates and any detected enemy players.

By default, the map will be focused and centered on your character and is considerably zoomed in to view only the immediate area. This is not how it should be and you should change this setting immediately or face dire consequences on the battlefield… Seriously, change it, and we’ll show you how:

First, you need to unlock your radar so it doesn’t always center on you. This is especially helpful when you are in the edges of the map and half of the radar is black.

Open the file autoexec.cfg and enter the following line:

After entering the command, you will immediately notice that the radar will utilize its space efficiently by not focusing on the player.

Now, the next thing you need to do is scale the map so it displays almost the entire map. Enter the following line on the same config file:

With this handy tweak you can now see the accurate position of your team mates even if they are at the far edges of the map. The only disadvantage of this, is the radar loses its detail.

Now it may not be a problem to some, but for those with bigger (HD) screens, this can becomes a problem. To compensate for this, you need to enter the following line to make the radar itself bigger.

With the three extra lines you’ll get a bigger radar that covers the entire map.

Now you’ll be able to spot on the enemies from a far and have a better view on your team mates positions.

CS:GO Is Best Played With A Team

Counter-Strike: Global Offensive  is not a one-man game!

Team work is very important especially when playing demolition maps. And perhaps the best way to make a  CS:GO team, is to form one from your group of friends and close peers.

EnviousHost’s CS:GO Servers (coming soon!) are the perfect way to do just that!

Practice your team work and individual skills as you play with all your favorite people from all over the globe! Then put your group to the test by pitting yourselves against the CS:GO veterans over this highly competitive first-person shooter.

So if you haven’t tried any of our servers before, now is the perfect time to do it and see what you’ve been missing.