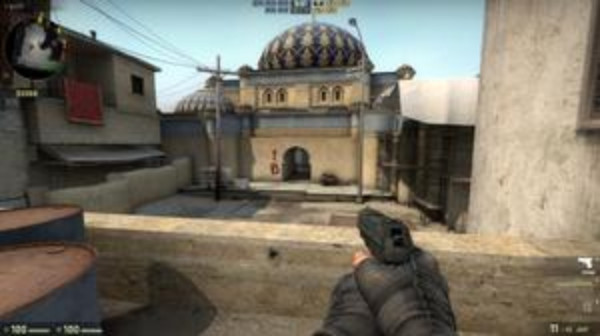 The AWP is notoriously known as the most overpowered weapon in Counter-Strike: Global Offensive. And why wouldn’t it be? Just like in the earliest of Counter-Strike iterations, a single shot from the AWP typically means death to anyone who gets hit cleanly. The best part for the sniper is that he doesn’t even have to move around as much like his rifle-equipped teammates do. He just camps in one or two specific locations and wait for enemies to walk by.

Due to this, many new players tend to immediately go for the AWP as their “main.” And then quickly find out that using it is more than just sitting around and waiting for would-be victims. Sniping is way more than that. If you’re similarly new to CSGO and want to give sniping a shot (no pun intended), then you need to start with the most basic principles. Which is what this article is about.

You need to familiarize yourself with the map and pick locations best suited for a sniper. Any spot that exposes both your sides is a bad spot. It doesn’t matter if your back is covered. Most of the time you’re scouting for enemies, which is harder to do if you’re checking more than two directions. A corner is always a good spot as it covers your back and one of your sides.

Before every round, be sure that you already have a spot in mind, and immediately head over to that spot when the round starts and camp away. But try to give a little variety to your spots every round, though. Enemies will notice it if you’ve fallen in love with just a single spot.

As a sniper, your primary goal is to stay hidden as much as possible. Don’t fret around too much in your spot. Just stay calm. This means you should avoid hopping from one spot to another if your spot isn’t giving you any targets to fire at.

The only time that you should really move is when your location has been discovered by an enemy. And while using Decoy Grenades sound like a good way to trick your enemies, it actually gives away your position and sniper role. So steer clear of them.

If you miss a shot, you will be immediately vulnerable. And unless you’re really good with close-range combat and your secondary pistol, that usually means death. So make sure that every time you fire a shot, it has a very good chance of landing. Stand still before firing your sniper rifle, and avoid moving around while you’re zoomed-in, too. The former lowers your accuracy, while the latter makes you vulnerable.

Similar to other guns, you also need to learn to predict where your target is going. But due to your limited number of bullets, this is even more important. Analyze his movement pattern and react accordingly. That said, it’s recommended to lower your mouse sensitivity. This helps your precision.

The last thing to keep in mind is that you’re not a front-liner. Meaning, it’s not your job to lead the team in walking speed. Stay behind your commando teammates, but make sure that you’ve got their backs as well. Have a Smoke Grenade on stand-by as much as possible – it’s your primary source of defense if you find yourself in a firefight in which you can’t properly aim. Finally, the biggest thing to remember as a sniper is to always be patient. Just like real-life snipers do.