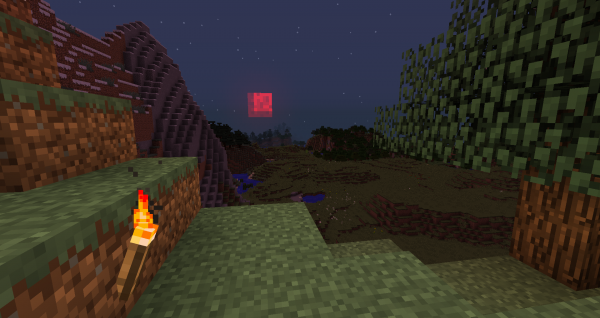 Want to make your evenings more “interesting” in Minecraft? Enter Minecraft BloodMoon, a mod that turns your seemingly innocent night into an absolute nightmare. According to lore, a blood moon is a sign of bad things to come. Minecraft BloodMoon brings just that.

When installed, the BloodMoon mod has a 5 percent chance of triggering the BloodMoon event. It’s not instantaneous, though. The mod is kind enough to warn you beforehand with a message that reads “The BloodMoon is rising…” That’s your cue to either run for your life or cower inside your shelter. Because you can’t simply sleep through a BloodMoon event – you’re forced to go through it by default.

What does the BloodMoon event bring?

When the event arrives, which is marked by the reddening of the moon and skies, it comes with a set of disadvantages and advantages. Yes, good things also come out it. During the event, mobs spawn faster than normal, and in the case of vanilla mobs, they spawn in much larger groups as well. Mobs also move faster and are capable of quickly overwhelming you. And if you need another reason to stay clear of enemies, they also do 50 percent (1.5x) more damage. Translation: Don’t go out looking for a fight.

Along with stronger enemies, the BloodMoon event also spawns four unique ones as soon as the event kicks in: Zombie King, Shadow Fiend, Crystal Dragon, and Yuria. All of which are boss-types and spawn at specific locations. The good news is, these event-exclusive abominations drop rare items. So it would be worthwhile to gather a party and take them on. Make sure your hunting party has a healer, though.

As for the good things, the BloodMoon event boosts the experience rate to 250 percent (2.5x) for every enemy killed. Items also drop at double the rate, with a 0.5 percent chance enemies will cough up a shiny Diamond. Quite handy if you’re in the midst of item hunting when the red moon makes an appearance. But as enticing it may be to feast on enemies during the event, the risks are simply too great, even if you go with companions. Better safe than sorry, as they say.

While waiting for the event to pass, you can waste time on a few other things like crafting or cleaning your inventory. Don’t worry, though – the BloodMoon won’t last any longer than an ordinary night. So, if you have a sort of fixed itinerary during nighttime, you could still follow it. Unless, of course, it involves hunting enemies.

The “easy” way out of the BloodMoon event

There’s one way to legitimately cheat your way out of the BloodMoon event, which should be favorable to those ill-equipped to handle it. See, the BloodMoon only affects mobs on the surface. So, in theory, you could “sleep” through the event by digging yourself an underground sanctuary or hide inside a cave. You could simply wait for dawn to arrive where all mobs spawned during the bloody event will vanish (assuming you configured the mod to act that way).

If you somehow enjoyed the tension brought forth by the BloodMoon event, you can also configure the mod to make the event appear more often. The BloodMoon mod is a good way to challenge yourself if you find the base game too easy now. It boosts your awareness and overall survival skills in Minecraft.

One thought on “MOTM – Minecraft Bloodmoon: Turning Nights into Nightmares”