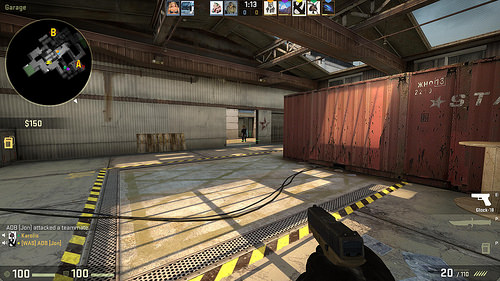 Razer, a brand that is popularly known for providing high-performance, high-end and expensive gaming hardware, software and systems, moved into a new area in the industry when they announced the release of a collection of Razer-themed Counter-Strike: Global Offensive (CS:GO) weapon finishes, they call the RZR Collection.

This collection of weapon finishes, which was produced with the help of Luke Millanta (an Australian freelance designer previously known for his work with Orange eSports, Fnatic and Multiplay), was first teased on a Twitter post on December 23, 2015 and then followed by another teaser 3 days later, which garnered more than 1,200 favorites in a span of 3 hours.

On the 3rd of January this year, the company finally made an official announcement about the release of the collection, which was hosted on the Steam Workshop, and offered a short preview video. Millanta also posted links to the news and the video.

The RZR Collection comprises 8 weapon finishes that feature primarily linear-based designs in the traditional color set of Razer, which are green, black and grey. Also, all finishes are named in honor of both past and present products of the brand.

Currently, Steam Workshop approval ratings for the collection are standing at 97%, but some of its members showed frustrations, taking to Reddit and Twitter that they were disappointed with the designs and that their favorite weapons were not covered. By any means, the most notable complaint is that some players do not want Razer-themed weapon finishes in the game, as according to them, they are just another form of advertising.

On your end, do you think that the RZR Collection should be added to the game or not?

Configuring the Game for Maximum Advantage

CS:GO’s surge in popularity should indicate that it might be high time to join such a very competitive multiplayer shooter today. Just remember that you need to set up your game for maximum competitive advantage. Though there is no best practice when it comes to this, as most configurations are personal preference, still there are tweaks that you can make to help you outplay the competition. These include understanding your graphic settings, improving FPS with launch options and adjusting graphics settings in the configuration file.