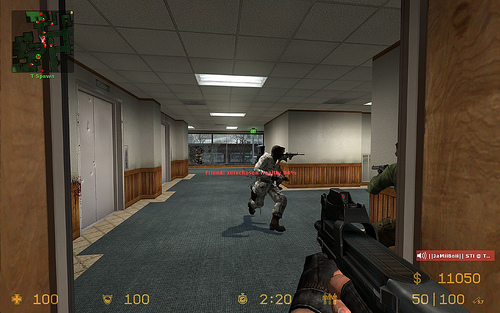 Game researcher and player Robert What wants to look deep into Counter-Strike: Global Offensive (CS:GO), focusing on its conceptual transformation. Despite this multiplayer first-person shooter (FPS) proving very popular these days, What wants to see it transform its features, from its static, realistic maps made for online competition to the dynamic artistic contemplation and social interaction where interesting things spontaneously happen.

With this goal, What has created a gallery of tailored images he calls the CS:GO Noclip Exhibition to try to unravel the game’s conceptual transformation. All in all, the collection contains 396 screenshots from around CS:GO’s maps, which he took and curated himself. The screenshots use the “noclip” command that allows you float and fly around the gamespace, passing through the barricades and walls that keep you boxed inside the maps when playing.

Most images in the exhibition reveal the surrounding void space that is beyond our sight in a video game in a striking way. When exploring it, you will see brick walls becoming transparent to reveal a magnificent gray space and houses standing fragmented and lonesome against an endless hue. Also, industrial buildings are revealed for their complexity when viewed from underneath without a floor. What writes, “This project conceives the voids between surfaces (andor surface-voids) not only as a postmodernist critique of digital architectures, but as a means to rethink relationships between subjects and virtual objects of architecture and suggest other forms of open reading.”

As a virtual tourist in the CS:GO Noclip Exhibition, you will be able to better understand the blueprint of a game space. This means that you can find some information to find exploits that would allow you to cheat the system when playing online matches. More importantly, What wants gamers to entirely see beyond the constraints of a game’s rules as developers have written them and to find a new form of playful expression. Relatively, he wants to see game engines shift from being used to create restrictive and deliberate games that are offered as products towards facilitating more immediate and accessible expressions of play.

“Imagine being able to position oneself anywhere in a game map and witness cool strange events occurring while you customize the immediate area with art objects, even adjust the ambient tone to fit your mood,” What stated. “That is, to move away from static maps to constantly moving systems of artistic expression, where how you play–ie. aesthetic style–becomes far more important and interesting.”