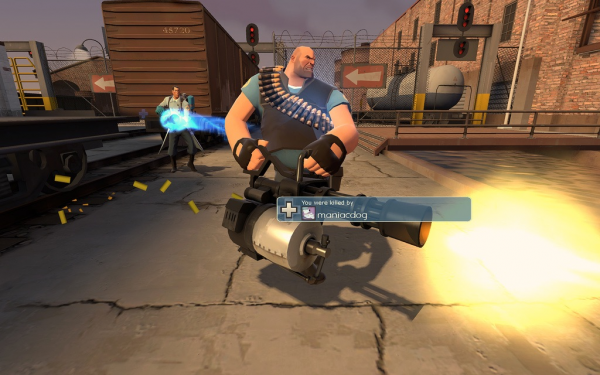 Pyro is the designated short-range unit in Team Fortress 2, capable of dealing heavier damage the closer he is to the enemy. But not because he has boss-like melee weapons under his command. No, Pyro is deadly when in close range simply because of his default Flamethrower. Similar to real life, your chances of survival when a flamethrower is fired your way goes up the farther you are from the flames. Get too close and you’re immediately human barbecue. The same thing applies in Team Fortress 2.

Due to his ineptitude in long-range combat, Pyro is best deployed using hit-and-run tactics, or anything that can catch an enemy off-guard – like sneak and surprise attacks from unlikely places. But his Flamethrower isn’t the only thing going for the Pyro. In fact, the number of options available to Pyro, weapon-wise, can make him a bit unfriendly for beginners. Fortunately, you have this mini-guide to walk you through.

First, it can save your allies from burn damage if they had a not-so-fun encounter with an enemy Pyro. Second, it can deflect projectiles and even send them packing to where they came from (assuming you can time it precisely). And lastly, you can use the blast to literally push enemies away. You can push them to areas where they will be vulnerable to, say, your ally Heavy or Sniper. You can also use it to drive away invincible enemies, courtesy of an UberCharge.

It’s very important that you’re always aware of your ammo status. Using the compression blast also takes up a lot of ammo. So practice using other Pyro weapons, too, if you want to last longer. The Pyro is the Demoman’s worst nightmare. He can use his compression blast to send Stickybombs packing and counter a deadly Chargin’ Targe attack. One last thing to keep in mind is that a Pyro is not very effective underwater, for obvious reasons. Well, unless you have awesome Shotgun or melee skills.