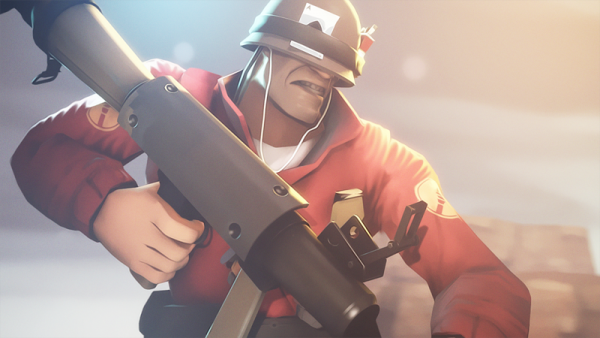 The Soldier is perhaps the most balanced class in Team Fortress 2 in terms of offense and defense. Like the Scout, a Soldier is capable of covering large distances in a short amount of time. But unlike the Scout, who primarily relies on his double-jump ability and unparalleled speed, the Soldier makes use of his Rocket Jump ability to go to places even the Scout can’t reach.

And like Heavy who specializes in, uh, heavy damage courtesy of his Minigun, the Soldier is also capable of sweeping large chunks off the enemy’s Health with his Rocket Launcher. If you can’t decide who to play between the Scout and Heavy, then go for Soldier instead.

The Soldier is one of the slower classes in Team Fortress 2. But unlike Heavy, you have his Rocket Jump ability to make up for it. This ability, as the name implies, allows you to launch the Soldier into the sky, enabling you to perch on places the Sniper can only dream of. You can also boost your Rocket Jump even further by firing your Rocket Launcher after a regular jump.

However, using the Rocket Jump takes a small amount of the Soldier’s Health. Which can be easily remedied with either the Rocket Jumper or Gunboats item. Speaking of Health, the Soldier also has the second-highest next to Heavy at 200. Meaning, you don’t have to be conservative with your Rocket Jumps. You can use the Rocket Jump to ambush enemies, go to locations quickly and retreat hastily from a fight (although make sure you’ll actually survive the Rocket Jump).

Rocket Launcher: With or Without?

Your main choice for offense is the heavy-hitting Rocket Launcher. The bad news is that rockets are slow-moving and the Rocket Launcher similarly reloads slowly. And they have low ammo, too. So make sure every shot counts. You can finish off critically wounded enemies with your secondary Shotgun.

The good news is that rockets have splash damage, which is perfect if your enemies are having a little get-together. You can bait your enemies to cluster together, and once they’re in picture-perfect position, aim for their legs and let the splash damage do its magic. If you have a thing for action movies, you can do a Rocket Jump and surprise enemies with a rocket shot from above, too.

But if you feel like the Soldier’s Health is restricting you from having fun with the Rocket Jump, you can opt for the Rocket Jumper weapon instead. Which isn’t really a “weapon.” The Rocket Jumper can’t damage enemies or yourself, meaning you can Rocket Jump to your heart’s content. This leaves you with either a Shotgun or a Melee weapon to serve as your source of offense. Essentially, you’re trading firepower for more mobility in battle.

And one last thing about the Soldier: Yes, the Rocket Launcher does heavy damage with the splash effect. But don’t forget that it also damages you. So if you’re engaged in a close-range combat, immediately switch to your other weapons. And try to avoid battles confined in small places. Your biggest advantage, as a Soldier, is being out in the open.