Having the right weapon is crucial in CS: GO and among dozens of weapons in the arsenal, two stand out as the most efficient and widely used. Hence, we brought you this comprehensive guide for these two weapons: the terrorists’ AK47, and CT’s M4A4.

The AK47 is debated as THE best automatic weapon in the current state of the game.

The AK47 features tremendous firepower, decent rate of fire and could one-shot-kill enemies even with armour (if you shoot them in the head). It is great for all ranges, but is especially suitable for medium and long distances.

By far, the AK47 is the most commonly used weapon in the game, even among CT side if they can get their hands on it.

Cheaper yet more powerful, the AK-47 costs only $2700 on the Terrorist’s black market (I’m assuming the shop is black market, else who would sell it to them?).

It has the same round capacity as the M4A4 that is 30 bullets per magazine and 90 bullet reserves. The AK-47 has a rate of fire of 630 RPM but with a reload time of only 2.5 seconds. Raising the equipped AK-47 weapon will also slow you down to a movement speed value of only 215. 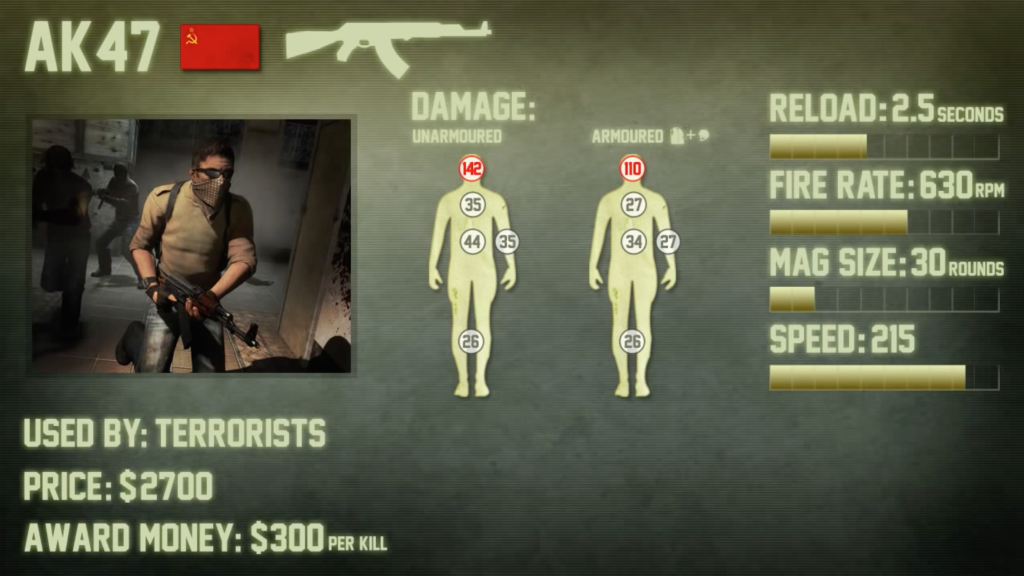 Since this powerful gun can one-shot-kill enemies in the head, it is recommended to avoid spraying altogether and instead focus on tapping (one shot, aim, repeat) and bursting (2-4 shots, aim, repeat).

However these techniques are often best on long and medium ranges. However, against multiple enemies in close combat, spraying will do you as good. Spraying is even more effective when countering the spray pattern.

For a more in depth tutorial on AK47, please watch this video made by TheWarOwl:

The default weapon of choice for the Counter-Terrorist side (CT) in CS: GO.

An amazing weapon, it is second only to the Terrorist’s AK-47 since it can’t one-shot-kill an armored enemy to the head. However, unarmored enemies (or enemies with no helmet) can still be killed with only one shot in the head.

Just like the AK47, the M4A4 is very effective on all distances particularly the medium and long range fight.

Although it is a bit weaker, the M4A4 is more expensive than AK47.

With the M4A4 weapon raised, you’ll have a movement speed value of 225, which is faster than that of the AK47’s. 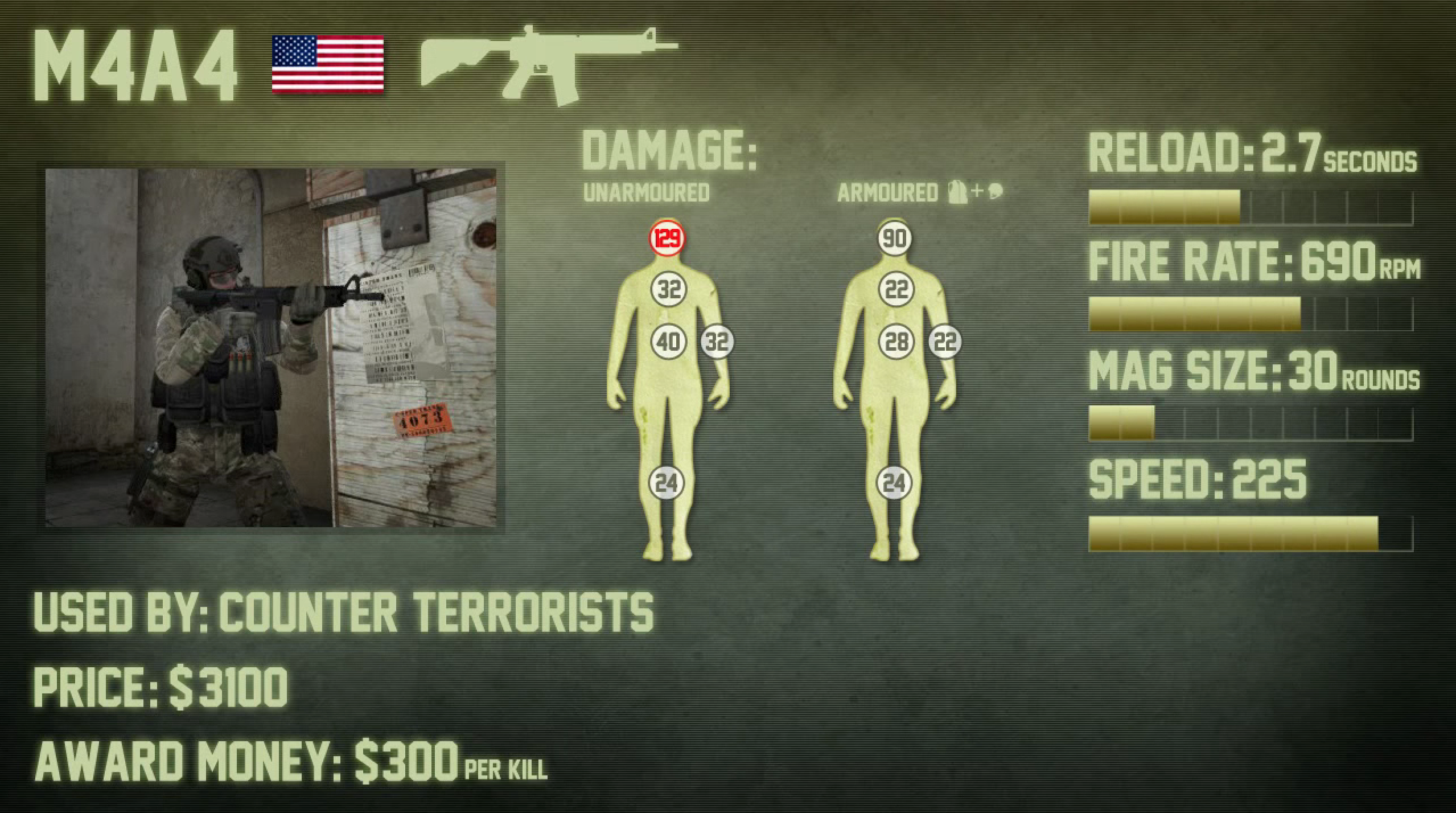 The recommended shooting technique while using the M4A4 is no other than the bursting. Against an armored opponent, you will only need to connect 2 bullets to the head to take him down.

Spraying is also recommended against multiple enemies in close range and practicing the spray pattern will generally help you as well. Unlike the AK47, you should avoid the tapping method because the M4A4 lacks the firepower to one-shot an enemy.

Choosing Between M4A4 and M4A1-S

The M4A1-S shares identical properties to the M4A4, except for a few, yet very important differences.

The M4A4 can carry around 120 bullets, while the M4A1-S carries only half of that. To balance that, M4A1-S has slightly more range, doesn’t leave tracers through smoke and is noticeably quieter.

It is also worth noting that the M4A1-S has a smaller spray pattern making it more beginner-friendly. However, when it comes to an open shootout, M4A4 is much more recommended.

For a more in depth comparison against the two identical weapons, watch Adren’s video:

In conclusion, the AK-47 is superior to the M4A4 due to the ability of killing an armored enemy with only one shot. However in close combat, M4A4 has the advantage of having higher RPM and movement speed.

Both weapons share almost the same spray pattern, so practicing both of them would really be helpful as these two weapons will be your bread and butter in CS: GO.

Looking for a way to practice your shooting skills but can’t find the right server?

Why not make your own with EnviousHost?

EnviousHost offers top notch hosting services without the lag and without the hassle for Counter Strike: Global Offensive, Garry’s Mod, Minecraft, and StarMade.

Backed with heavy duty hardware and top of the line software, you can never go wrong by picking EnviousHost as your server partner!

So what are you waiting for? Get your own server and start sharpening your skills today!